These five iconic cars from TV and cinema not only sparked the automotive passion in my youth but stir the nostalgia still today.

Lotus Esprit S1 – The Spy Who Loved Me 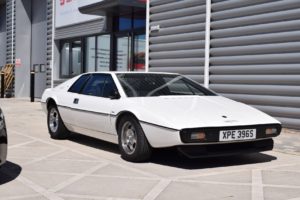 My passion for cars started in 1977 with Hethel’s new pocket supercar outrunning and outsmarting a Bell JetRanger helicopter with some fancy wheel-work and an incredible aquatic transition in The Spy Who Loved Me.  As I was not quite seven years old when the film was released it was likely a few years later when it first aired on TV that I saw the whole movie but I’d seen enough to want the Corgi diecast Esprit which quickly became my favourite toy.  For those who’ve never seen one, it transformed from road car to submarine complete with fins and dive planes by pressing on the bonnet vent and a tweak of the periscope fired off four sprung-loaded projectiles.

There’s something about the early Esprits that still takes my breath away today.  The simplicity and proportions of Giugiaro’s “folded-paper” wedge stops me in my tracks every time and takes me back to hours spent pinging orange plastic missiles across my bedroom floor.  By 1981, with the introduction of the S3 revision and the Turbo, the design purity was lost as body-coloured bumpers and more body styling features were added to keep the Esprit up to date. 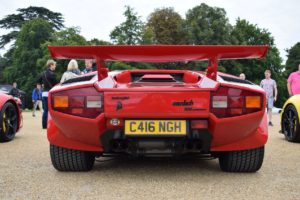 In the early ‘80s I started secondary school and this meant a 30 minute bus ride each way. My friends and I discovered that playing Top Trumps was a great way to make the time pass and the Sports Cars pack was a favourite.  One of the best cards to have was the Countach – although none of us knew how to pronounce it properly back then – which could do no worse than a draw when exclaiming “Cylinders – V12!”.

Having missed the first instalment, we went to see Cannonball Run II at the cinema and by the end of the opening title sequence, we were even more in awe of the look, sound and performance of the Countach – whether white or red!

DMC DeLorean – Back to the Future 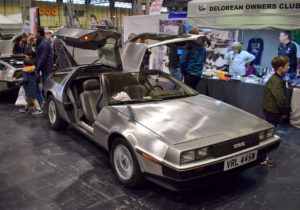 By the mid 1980s, John DeLorean’s car company was an awkward memory to the people of Dunmurry, Northern Ireland who had built the sole production model. Were it not for Hollywood, the quirky gull-wing, under-performing, stainless-steel sports coupe would have been all but forgotten.  The successful Back to the Future trilogy greatly renewed interest in the car and secured its place in automotive history.

Whether wearing its time-machine accessories or in original Giugiaro-designed trim, the DeLorean seems timeless and eye-catching.  There are not many cars that you can buy today for around £30,000 that can sit alongside seven-figure hypercars at a car show and still draw a crowd. 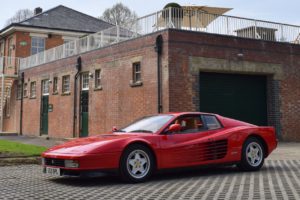 When Ferrari became aware of the success of the US cop show Miami Vice and learned that a replica Daytona, based on a Corvette, was being used by the hero Sonny Crockett, things could have gone badly wrong. They could have sued them for intellectual property infringement – which they actually did to begin with – but then agreed to a deal involving the show featuring the new Testarossa provided that all replicas were destroyed.  Ironically, the same replica shop went on to recreate a Testarossa based on a De Tomaso Pantera in order to avoid adapting and using the real Ferraris for stunt work.

Although the white featured on Crockett’s “monospecchio” (single mirror) Testarossa wasn’t a popular colour – only three were ever supplied in UK spec – around 10,000 cars were sold worldwide – if you include the TR and F512M derivatives. With its wide stance and trademark side strakes leading to the radiator ducts the Testarossa was like nothing else. It was the epitome of cool and came to symbolise everything that was brash about the late ‘80s.  Over the next two decades, what was cool about the 1980s quickly became uncool and not until the last few years has the Testarossa returned to general appreciation. This period of being considered naff clearly affected values and now the Testarossa is priced well below other equally iconic Ferraris. It’s also interesting to note that Crockett’s wayfarer sunglasses and loafers with no socks are back in vogue – thankfully the mullet hairstyle has yet to make a comeback. 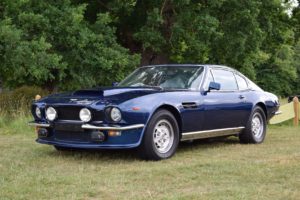 James Bond once again features to round off my list and as Timothy Dalton brought to an end Roger Moore’s reign as the 007 of my childhood so too the Aston Martin V8 ended the marque’s 18 year absence from the franchise. Did you know that Dalton very nearly didn’t take up the role in The Living Daylights? Sam Neill (later from Jurassic Park) was in early contention and it was originally offered to Pierce Brosnan but withdrawn after contractual issues.  Even Robert Bathurst (bumbling David in Cold Feet) was auditioned before Dalton was eventually persuaded to take the part.

The muscular Series 4 V8 – “winterised” from Volante to Coupé during the film by Q branch – carried on William Towns’ design evolution that he started with the DBS and Vantage Grand Tourers of the early 70s.  Its solid fastback shape borrowed heavily from the Ford Mustang but the curves and bulges were sufficiently refined to retain its Britishness. A perfect vehicle for the rebooted secret agent to take on the KGB in.

Aston Martin made some great looking cars both before the V8 and since but this is the one Aston I’d like to own above any other for its purposeful stance and hint of polite menace.  Others must think so too as values have soared over the past 4-5 years and it is set to make a welcome return in the next Bond film No Time to Die.

What screen cars from back in the day still get you revved up – leave a comment below?

Would you like us to review a product, service or car?