As the sun comes up on the 25th Goodwood Festival of Speed presented by Mastercard this morning, early visitors will be treated to another iconic creation by sculptor Gerry Judah, this year jointly presented by Goodwood and Formula 1® in celebration of the extraordinary life and career of Bernie Ecclestone.

The jaw-dropping work is in recognition of the ‘The Five Ages of Ecclestone’ (see below); five defining eras of Bernie’s career, as a driver, manager, team owner, impresario and quite simply as a legend of the sport. Each age is portrayed on the Central Feature by a different car, glinting high up on 5 arms, shooting out of a perfect, white circle. 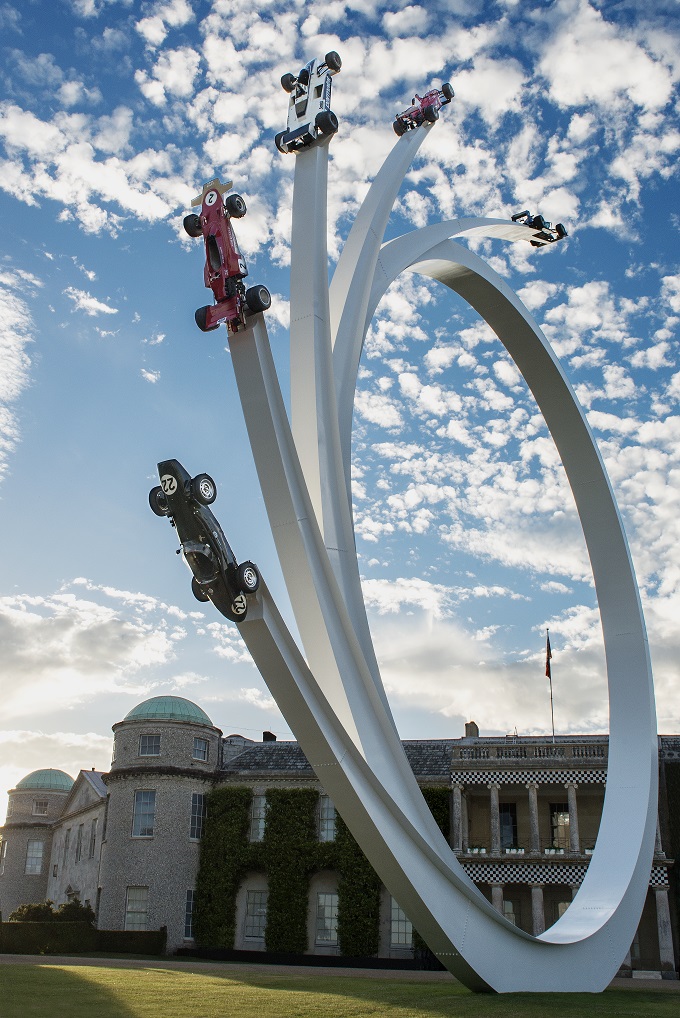 “Coming up with a sculpture for Goodwood is always a challenge”, said Judah. “They have to be different, dynamic and dangerous, as motorsport itself. This year is no exception given we are celebrating an individual, a phenomenon, and what better way than producing a firecracker.”

Bernie will attend the Festival of Speed along with a host of World Champions, team owners, engineers, designers and mechanics from his life in motor racing, culminating in a key tributary moment on the balcony of Goodwood House at 3pm on Sunday July 2nd.

Festival-goers can look forward to a joyous weekend of motorsport, with highlights based around this year’s ‘Peaks of Performance – Motorsport’s Game-Changers’ theme, paying tribute to the high- watermarks of motorsport.

In addition, Goodwood will honour 70yrs of Ferrari, 110yrs of Brooklands, Tom Kristensen’s 50th birthday and the 20th anniversary of his first Le Mans win alongside welcoming a veritable host of legends of motorsport including current World Champion Nico Rosberg.

The four-day event will culminate on Sunday with Goodwood’s first ever drift competition including all the current stars of the drifting world and finally the spectacular Sunday Shootout where the fastest champions of the weekend will compete for the title and the trophy.