The 2014 edition of the Concorso d’Eleganza Villa d’Este competition could not have gone better for Maserati, especially in this year of celebrations marking the centenary of the company’s foundation.

Indeed, Maseratis earned the highest plaudits from the judges and public alike, collecting the Best of Show prize as well as other prestigious awards including the “Design Award for Concept Cars and Prototypes”.

The surprise winner of the jury’s Best of Show trophy, sweeping aside a host of prestigious rivals, was the dark blue 1956 Maserati 450 S (below), owned by Swiss entrepreneur and collector Albert Spiess. In 1956 and 1957, the Modena car manufacturer built just ten of these 2-seater racing cars, fitted with a 4.5-litre 400 HP engine and a body by Fantuzzi. This car, chassis number 4502, left for the United States in October 1956, purchased by Tony Parravano. It went on to compete in a number of races, meanwhile changing ownership several times before coming into the possession of the present day Swiss owner. At Villa d’Este the 450 S also triumphed in its own racing category, “For the track – racing for glory”, reserved, as the name suggests, for racing models from the 1950s and ’60s. 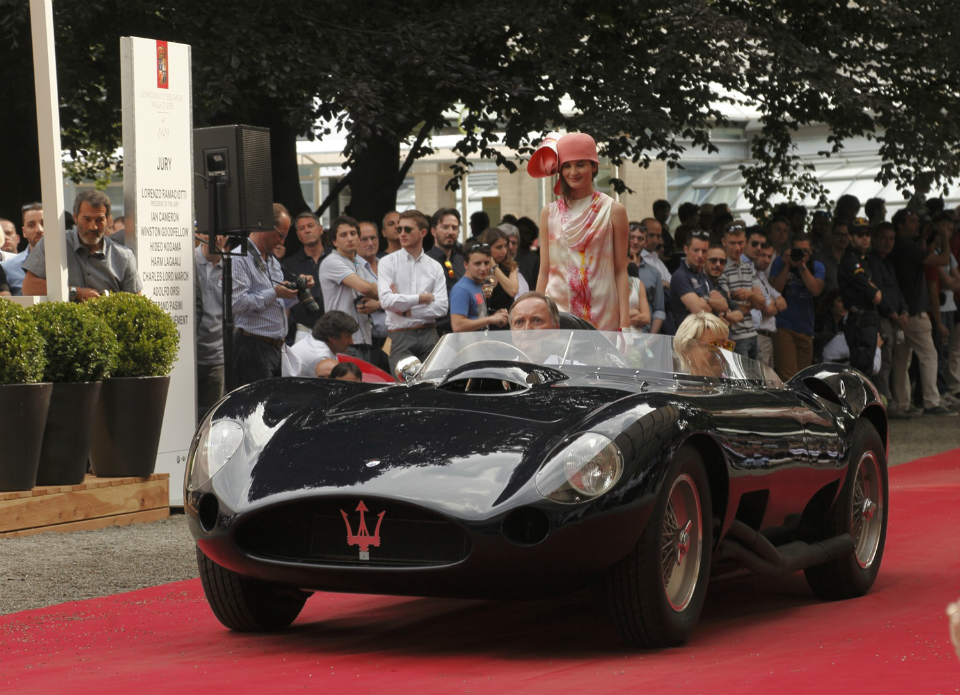 In the special centenary category “Maserati – the first century”, which saw six Maserati cars from different eras in the running, the V4 Sport from 1929 (chassis 4002) outshone its “sister” models, taking the jury’s top award. It is a truly rare and unique automobile, owned by Lawrence Auriana (USA). Only two were ever made, but one was converted into a V5 that was subsequently destroyed during a race. The V4 features a 16-cylinder V engine comprising two Tipo 26B inline-8 blocks, for a total cylinder capacity of 3,961 cc, delivering 305 HP. On 28th September 1929 Baconin Borzacchini set a world record in the V4 on the road circuit at Cremona (only partially asphalted), notching up an average speed of 246.069 km/h over a distance of 10 km. In 1934 the car displayed at Villa d’Este was rebodied as a Spyder by Zagato at the behest of the new owner, who also had it repainted in two shades of green. The V4 enjoyed more success than the other equally prestigious Maseratis present, namely: Maserati A6G/54 Berlinetta Allemano 1956 Jonathan Segal US; Maserati A6G/2000 Berlinetta Zagato 1956 Claudio Scalise AR; Maserati 150 GT Prototype Spider Fantuzzi 1957 Andreas Mohringer AT; Maserati Quattroporte 1st Series Saloon Frua 1965 Ermanno Keller IT; Maserati A6GCS Berlinetta Pininfarina 1953 Matteo Panini IT. 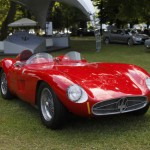 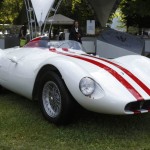 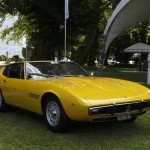 On Saturday the jury awarded the A6GCS Berlinetta the Auto & Design Trophy for the most thrilling style. Pininfarina made only four chassis mounted with a 6-cylinder 2-litre engine; it was this design that provided the Maserati Style Centre inspiration for creating the Alfieri concept car, unveiled at this year’s Geneva Motor Show. In a hypothetical passing of the baton, it was precisely the Maserati Alfieri that earned important recognition from the public at the parade held at Villa Erba, as it scooped the Design Award for Concept Cars & Prototypes, heralded as the most exciting prototype of the 2014 edition. The concept car designed to celebrate Maserati’s 100th Anniversary is an exciting but also functional prototype whose name pays tribute to Alfieri Maserati who, with the help of his brothers, promoted and founded “Officine Alfieri Maserati” in Bologna in Via Piepoli back in 1914.

The Maserati Alfieri was designed at the Maserati Style Centre in Turin by a group of designers coordinated by Marco Tencone, elaborating on a project by Lorenzo Ramaciotti, now Head of Global Design FCA. The Alfieri was driven into the exhibition area at Villa Erba by Harald Wester, CEO Maserati, who collected the award in person.

Also at Villa Erba, Maserati set up its own exhibition space to celebrate the marque’s 100th anniversary. On show, the new Ghibli plus the GranCabrio MC, alongside other vintage masterpieces of engineering, including a 1934 4C and a 3500 GT Spyder.

Lastly, also taking part in the “Six Days in the Sixties” class of the motorcycles category of the Concorso d’Eleganza, was a 1961 Maserati T 4 Regolarità 156 cc single-cylinder motorcycle, presented by the Bologna Historical Registry of Maserati Motorbikes.