As well as a packed programme of historic racing for all three days, the Ayrton Senna tribute and the historic rally car action, there will be a host of other attractions to keep visitors thoroughly entertained at the Donington Historic Festival.

Kevin Wheatcroft, the Chairman and owner of Donington Park, will take to the track each afternoon, giving demonstration laps in his replica of a 1937 Mercedes-Benz W125 Grand Prix car. This exceptional machine is the result of a long and extraordinary labour of love started by Kevin and his late father Tom, the founder of Donington Park and the Donington Park Grand Prix Collection. In the course of exhaustive research for the project, Kevin stumbled upon a complete set of working drawings for the original W125. He then had two further pieces of remarkable good fortune: the Schlumpf Collection allowed him to borrow one of its legendary Silver Arrows – fittingly, the very W125 that Hermann Lang raced in the 1937 Donington Grand Prix – and Formula One’s Bernie Ecclestone gave access to his own, restored W125, the only example in private hands. Kevin and Tom’s team spent thousands of hours measuring every single component and collating an enormous amount of information. This meticulous work was carried through to the final build, with the car being built to original specification down to the most minute of details by the craftsmen at Crosthwaite & Gardiner and Roach Engineering. Just five of these replica 1937 W125 Grand Prix cars will be built, each taking 18,000 hours to manufacture, with the process beginning with a single, raw billet of aluminium. This wonderful replica doesn’t just look exactly like the original, it also sounds and smells the same. The sight of it being driven around the Midlands circuit is sure to evoke thoughts of the late 1930s, when the Silver Arrows drove to victory at Donington as they continued their domination of Grand Prix racing across Europe. 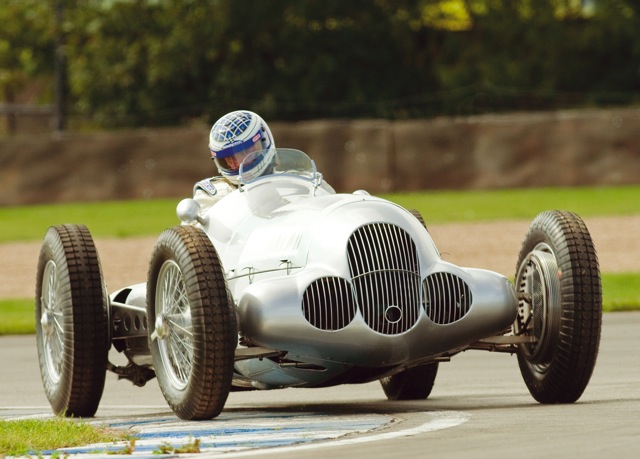 Battle of Britain Memorial Flight takes to the skies

The sounds of powerful historic engines are, of course, everywhere at the Donington Historic Festival and, as the circuit is adjacent to East Midlands Airport, the sights and sounds of modern-day aircraft are also a regular occurrence. At this year’s Festival, the aviation and historic elements will combine, with a fly past from the Royal Air Force Battle of Britain Memorial Flight. Weather permitting, Festival visitors on the Friday will be treated to the sight of the magnificent Douglas C-47 Dakota in the skies above Donington Park, while spectators on the Saturday and Sunday will enjoy see the stunning sight – and sound – of a Lancaster, a Spitfire and a Hurricane flying together.

With around 60 car clubs, from Abarthisti to Z Club of Great Britain, now registered to attend the Festival, Donington Park’s infield will be home to a veritable A-Z of motoring for the weekend. Highlights will include the Porsche Club GB’s Sunday parade of 50 911s, celebrating that hugely popular model’s 50th anniversary, and the ‘Super Samuri’ gathering. This will see the Classic Z Register and Z Club joining forces to bring together not just plenty of classic Datsun 240Zs and 260Zs, but also as many examples of the famous ‘Samuri conversion’ racing cars as possible. ‘Big Sam’ – the car in which Win Percy won the 1974 British Modified Sports Car Championship, before he went on to achieve Touring Car glory – will be there, as will Win himself, showcasing his own Samuri.

Win a pair of tickets

To win yourself a pair of tickets to this wonderful event tell us why you’d love to go. You can see all our competitions here.

2 comments on "The 2013 Donington Historic Festival will dazzle on the ground and in the skies."